The biggest way that GREAT Sorts reduce landfill waste is to EARTH-CYCLE food scraps and garden waste into compost at home or, in some areas, through your kerbside bins. 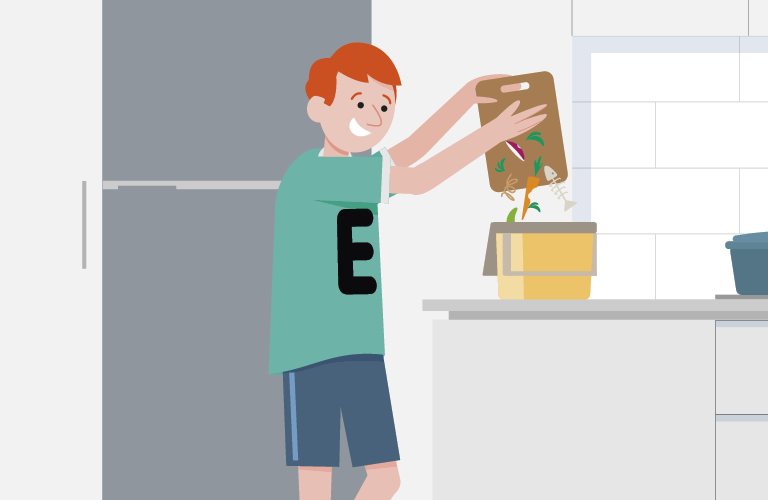 It’s easy to avoid sending food scraps and garden prunings to the landfill bin, where they don’t belong, by joining the backyard revolution of people composting at home. Your choices include  traditional composting, worm farming or bokashi. Find out more in the beginner’s guide to composting.

Whether you home compost or use a FOGO bin, the solution starts in the kitchen. Most people find it easy to set up a kitchen caddy for collecting food scraps. GREAT Sorts use things such as an old ice-cream container, little bin or purpose-made caddy. Ways to keep the container fresh include:

Earth-cycling – better than the landfill bin

Composting is nature’s way of recycling – it’s the process of turning natural scraps (think food scraps, leaves and paper) into nutrient-rich compost which will help your garden and soil thrive.

By composting at home or using the FOGO bin, GREAT Sorts significantly reduce the amount of waste they send to landfill. About 50 per cent of a typical household’s general waste each week is made up of organic materials such as food scraps and garden waste. If organic material is sent to landfill, it produces methane gas.

FOGO – or food organics and garden organics – is the term often used when referring to a three-bin system where any waste that once lived (such as food scraps and garden waste) is diverted from landfill and processed to make soil enrichers and compost for use in parks, gardens and in agriculture.

It is an effective approach to waste management in Western Australia that diverts large volumes of food waste. FOGO goes a step further than the ‘garden organics’ or ‘green waste’ bin that some local governments have offered their residents over the past decade.

The FOGO bin, with its lime-green lid, is supplied by participating local governments to their residents, together with a yellow-lidded recycling bin and a smaller red-lidded bin for general waste. The FOGO bin is typically collected each week, while recycling and general waste bins are collected on alternate weeks.

So what goes in a FOGO bin?

One way to think about it is: “If it didn’t grow, or it wasn’t alive it’s not FOGO!”

All of your food scraps can go in the FOGO bin, including fruit, vegetables, bread, meat, bones and leftovers. So can grass clippings, flowers, weeds, herbs, small branches and leaves.

FOGO bin contents will be composted, so you can also put small amounts of paper and cardboard in (such as used kitchen paper towels and pizza boxes with food residue). It is essential to keep all plastic, aluminium, glass and anything labelled ‘biodegradable’ out of the FOGO bin.

Sometimes it takes a community

Even if you do not have the time or space to compost at home, you can still give your food waste a second chance with ShareWaste – a local collective that connects people who wish to recycle their kitchen scraps with their neighbours who are already composting, worm farming or keeping chickens. People can either donate or receive organic waste to be transformed into nutrient-rich soil.

Where does FOGO Go?

The contents of FOGO bins are transported to a waste composting facility where it is turned into soil conditioner or compost.

How is FOGO different to my home compost?

Although it can differ between local government areas, most FOGO bins accept items which are not usually compatible with home composting systems, such as citrus, onions, bones, meat and seafood.

Be a GREAT Sort! Compost your food scraps and garden waste at home, or through your lime green FOGO bin if you have one.